What life is like with two sets of twins 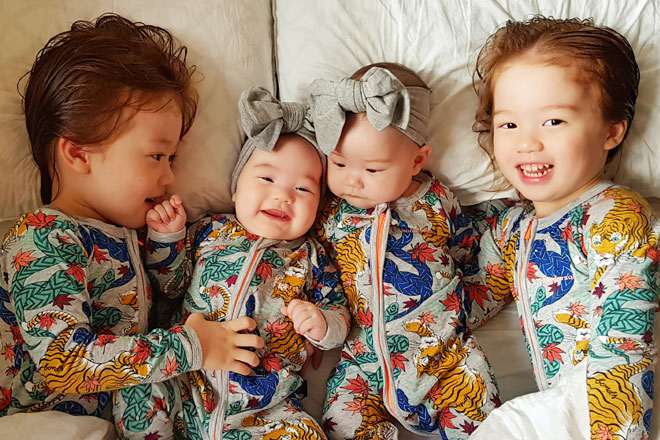 Her chances of having a second set of identical twins were somewhere around 1 in 70,000 but for Sydney mum Sophia Brown this is exactly what happened. With no family history of twins and conceiving naturally both times, Sophia and her husband Paule welcomed twin boys, Ethan and Harley, now aged four followed by twin girls Camilla and Madison, who have recently celebrated their first birthday. The popular blogger behind Twins and a Blog, Sophia shares her experience of life with twins x 2.

When you found out you were expecting twins for the first time, how did you feel?

At my 6 week dating scan it showed one heartbeat and a shadow behind the sac, which the report said was a blood clot or a failed twin pregnancy. I was relieved and laughed at it being such a close call because…’OMG imagine if we had twins!’

It was at my 10 week appointment with my Obstetrician that I found out we were expecting twins. He told us to look at the screen and pointed out there was two heartbeats. As it was the first time I had been pregnant I had no idea what to look for or expect and automatically thought it was an abnormality in the baby until he pointed out there was in fact two babies in there! I felt a range of emotions from being shocked, terrified, excited and nervous.

When your boys arrived, how did you handle being a first time mum with two babies?

I was terrified of being alone with them by myself for long periods. When my husband had to go back to work after a few weeks off, I asked my mum to be with me. I felt that I always needed a one baby to one adult ratio.

When you found out you were expecting twins for the second time, did that come as a massive shock?

The 2nd time round was a huge shock as I had prepared myself for the experience of being pregnant and having one baby! I thought we had experienced the crazy chance of having twins once, there was no way we could have them again!

What was life like with two newborns and two toddlers when your girls were born?

Life was hectic with two newborns and two toddlers but because we dived into the deep end with newborn twins before as first time parents, it was much easier the second time around as we already had an established tried and tested routine. It was hard to divide our attention between two newborns that fed every 2-3 hours but also between two toddlers so they would not feel replaced or left out with new siblings. The positive of having twins is that they were never an ‘only child’ and are used to sharing our attention, so it was an easy transition. We tried to get out of the house regularly to have a break from the monotony of home life.

What were your biggest fears about having twins?

I had really uncomfortable pregnancies where I was in bed a lot, so I had all the time in the world to Google and worry about all the ‘what ifs’. Once the babies were born there’s no time to worry about anything as life is just go, go, go!

How do you and your husband balance it all together?

Generally, when it comes to meals, bath time and bedtime, I’m in charge of the girls and my husband is in charge of the boys. I am also back at work part time. We have very supportive workplaces so on the days I am at work, my husband has those days off his roster (shift work) so we can look after the kids between us.

What do you love most about having a big family? And what is the biggest challenge?

I only ever wanted two kids, but after having four kids (from two pregnancies) I can see the appeal a big family has! I love the noise, chaos, laughs, cuddles and company. I have learnt to be a multi-tasking ninja mum, but it all goes down the drain when someone (or everyone) gets sick – then I can really feel the weight of having four kids! My biggest challenge is the laundry – I can never keep up!!

If there was one thing you could tell a mum who is expecting twins, what would that be?

Lower your expectations with cooking, cleaning and your appearance. There is a light at the end of the tunnel once you get through the newborn blur, and they are teeny tiny babies for such a short time! I was so hard on myself when I had the boys I feel like I completely missed and resented the newborn stage. I learnt my lesson and enjoyed and cherished every moment when the girls were newborns!