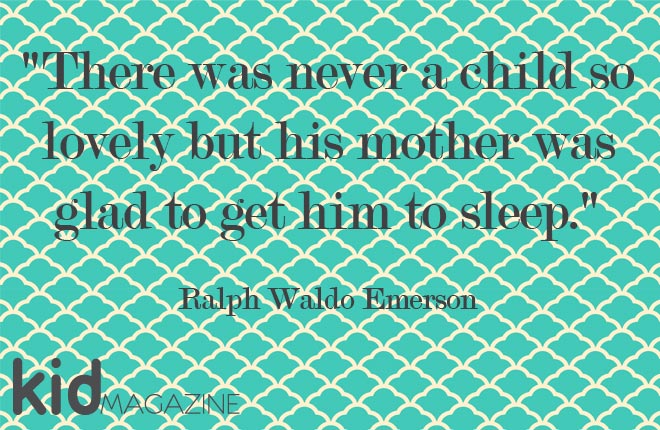 “There was never a child so lovely but his mother was glad to get him to sleep.” ~Ralph Waldo Emerson

Sleep has been on my mind a lot lately. Specifically, how to get Olivia to do more of it. Right from day one she has been an amazing sleeper at night. She would sleep 6-8 hour stretches over night even at six weeks old and very quickly she was sleeping all the way through. When she was seven months I stopped her dream feed and she didn’t protest. Like I said, she has been a model example of baby sleep brilliance.

And then we came to eight months when all the misery began. I had heard about sleep regressions and thought I was immune to them. There is supposed to be one at around the four-month mark but it never came anywhere near us. So when my darling girl went from falling asleep so easily each night to resisting any attempt we made at putting her to bed, I felt so out of my depth.

Each day I would have this over-tired baby on my hands and no matter what I did she just would not sleep. Well, actually, the only thing that would put her to sleep was a drive around the block late at night. After two weeks it got to the point where I couldn’t handle it any more. Hubby and I couldn’t be driving the streets every night just to get Olivia to sleep, let alone during the day when I was going crazy just trying to get her to close her eyes even for a few minutes.

I ended up calling Tresillian one afternoon. I already knew what they were going to tell me but it was almost like I needed permission from them to do it. I had tears welling up in my eyes while the nurse told me to put my baby in the cot awake and to let her cry herself to sleep. I felt guilty even listening to this advice. But I listened and started to action what she had told me. That afternoon, Olivia screamed for about twenty minutes before falling asleep. I went in and soothed her briefly every five minutes. She slept for thirty minutes and when she woke up, if looks could kill, I would have dropped dead on the spot.

But last week I had one of those lightbulb moments. I realised that I was so fixed on a set breastfeeding routine that I was putting Olivia to bed half an hour before she was due for a feed. Of course she was going to wake up crying – she was hungry! So then I started feeding her before I put her to bed, even if that meant feeding her 30 minutes early. And it worked. The other thing I did was not rush into her room as soon as she woke up. Miraculously, after waking from a short nap she was able to resettle herself for another hour sleep. My world has changed.

I love my daughter, but getting her to sleep and having quality time to myself (to work or relax) and time to spend with hubby at night is so valuable. Now that she is sleeping longer during the day I have also found that she is happier. The witching hour(s) is less painful for everybody and better day sleep is turning into better night sleep. We still have our moments but generally she is sleeping for the better.

This is just my experience of dealing with sleep for my baby. Every baby is different, but if you are struggling then reach out and ask for help. Call Tresilian or Karitane, ask your early childhood health nurse or your GP.

What is your best tip for getting baby to sleep well?