Raising bilingual children: how hard is it really? 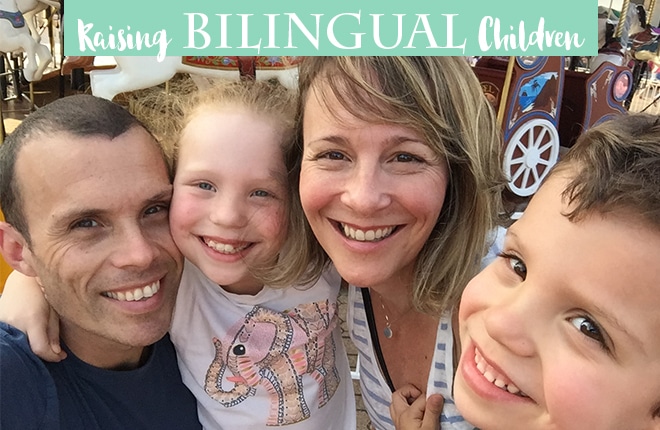 Maya Broers is a mum of two and, along with her Norwegian husband, is raising bilingual children. Or trying to, because as she has discovered, it isn’t always that easy. Maya shares her experience and tips for other parents wanting to teach their kids multiple languages.

Even though it always feels quite exotic to say my daughter and son have only ever been spoken to by my husband in his native tongue of Norwegian it isn’t always as easy or exotic as it sounds. It is true my husband was amazing with our first child, always speaking to her and reading to her in Norwegian. Yes, she understood everything but when was she ever going to speak back?

Some say if they don’t speak by the time they are six years old then the window is lost and they will never speak. OH NO, the pressure! Please daughter speak, don’t let all that hard work go to waste.

My four-year-old son however didn’t get as much attention in the second language department, and refuses to talk or listen to any another language than his own constant chatter. Maybe that’s because he is four or maybe he wasn’t given the same attention as our first child, only time will tell I suppose.

Some say it’s my fault (well mainly my husband) that if I was more committed to speaking Norwegian then we could speak more as a family and all would be fabulous. But unfortunately even though I lived in Norway and went to language school where I learnt to speak enough to get by I find it hard. My confidence levels when speaking aren’t great so even when I try, it doesn’t take much of a stumble before I find myself speaking in English again.

As I write this I am in Norway and have watched both my children be challenged with talking to their cousins who don’t speak any English. My daughter, who is now nearly eight however has totally surprised us talking constantly to her cousins and not being shy or awkward. Maybe she doesn’t have the largest vocabulary but she is in there speaking in her second language. It brings us so much joy to hear her talk and know that something has sunk in!

It’s amazing how much she actually knows, she even is correcting me on my pronunciation of words and their meaning. Even though she did say that today was so amazing as we spent the day with an English speaking child, quite dramatically telling me, “Mummy, I could just talk and let English flow out of my body.”

My son hasn’t had it so easy. He just speaks to everyone in English which has lead to some rather confused kids and some rather harsh comments like “That kid over there is crazy” and “What is that kid going on about”, which my four-year-old is thankfully oblivious to.

We aren’t the best at being consistent and I think that is the key. I know of other multilingual families who are much stricter in their approach and only answer their children if they speak back in the language that is being spoken. Having grandparents and other family members to speak to is always a bonus. My kids love to speak to their grandparents on Skype.

All in all I love that my children have two different languages in their life. Whether they chose to speak Norwegian I guess is up to them in the end, but we as parents need to encourage and keep language fun and give them a little gentle push when they need it. We all want the best for our children and want them to have every opportunity they can.

Maya Broers is the owner of FuelBox Australia, Mum to Pernille and Ibsen and wife to a Norwegian husband. She is also a yoga teacher and former singer/songwriter in her pre-kids life.

FuelBox is the toolbox to remind couples about the importance of one-on-one meaningful conversation. FuelBox the box of great conversations with its 170 questions in 10 topics, provides back to basics, no distraction, interaction between couples, to help nurture open dialogue and deeper communication.

Are you raising bilingual children? What are your tips?