Keeping kids safe on the roads this holiday season 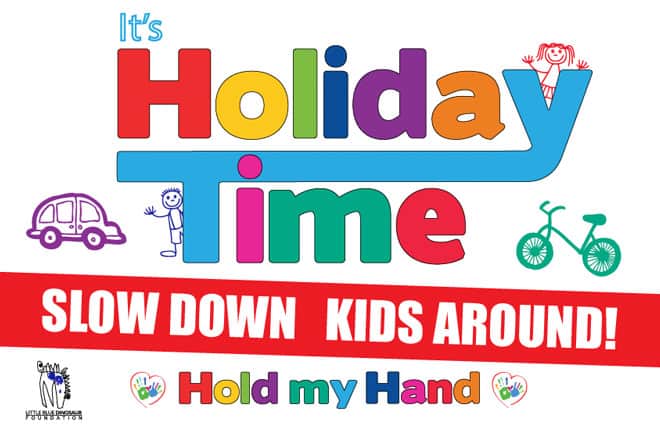 Did you know that 196 children have been killed in road accidents since 2014?

Or that traffic injury is the biggest killer of children under 15y?

Or that if a pedestrian is hit at 60kph there is an 85% chance of death?

These are sobering statistics for a parent to read at anytime of the year, but as Renée Meier explains, around the holiday season when we need to be particularly mindful about road safety and children.

School is out and there are plenty of kids about!

There are people to visit, sights to see and experiences to have. Parents everywhere are herding excited children to and from parks, beaches, shops and homes, often in

unfamiliar environments. With so much going on, it can be so easy to lose sight of a small child in the blink of an eye.

The family of 4.5 yr old Tom McLaughlin know this harsh reality firsthand. Their young son, who had been taught the importance of road safety, tragically stepped out onto the road in front of a 4wd whilst on a beach holiday with their family.

Horrifyingly, Tom died of his injuries at the scene of the accident. The car that struck him was only travelling at 50 kpm.

To raise awareness that this tragic accident can happen to anyone, Tom’s parents created the Little Dinosaur Foundation . Each year they campaign to raise the profile of child pedestrian safety.

Their message is simple:

But their campaign is not just directed at drivers. The Little Dinosaur Foundation want parents, children and other road travellers to understand how vulnerable little people are on and around roadways.

This is because children have physical, perceptual and cognitive limitations around roads.

It isn’t until the age of 8 that children start to recognise differing roadways and become more confident in coping with changes in the traffic environment.

In fact, until the age of 10, children have:

These factors raise the risk of an accident occurring quite significantly. Which is why an adult should always accompany and actively supervise children until 8 when they’re anywhere near a road.

Other tips to ensure children’s safety whilst near roadways include:

Most importantly, parents need to model good road safety and awareness around children. As with anything, they will learn more from what you do than what you say!

Renée Meier is a freelance writer, aspiring novelist and mother to three rambunctious children. When she’s not being distracted by social media or drinking copious amounts of coffee, Renée can be found wandering along one of her beautiful local beaches with her two dogs. Her lifelong dream is to earn enough money to afford a housekeeper.