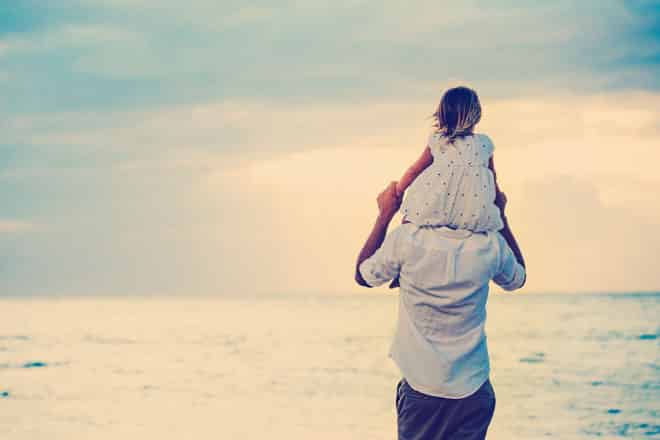 The conversation around postnatal anxiety and depression has really shed light on the suffering of so many mothers in our communities. And while that conversation does recognise the pain of dads, Sara Keli asks if we are doing enough to support fathers suffering in the parenting trenches.

The early years of raising kids are tough. You are exhausted, overwhelmed, confused, irritated, over touched and there has never been more at stake. Add in one or both parents suffering from postnatal anxiety and depression and the bumps in the road that come with parenthood turn into seemingly insurmountable mountains.

You will likely be familiar with the stats. 1 in 10 women and 1 in 20 men will suffer from antenatal depression or anxiety while more than 1 in 7 new mums and up to 1 in 10 new dads will suffer from postnatal anxiety or depression (Source: Anxiety and Depression in Pregnancy and Early Parenthood, PANDA).

In those early years, support is a critical factor. Support between partners, support from family and friends in the “village”, support from medical professionals and other support networks that are traditionally sought out by mothers, i.e. mothers groups. And while these aren’t a catch all by any means, they do play a role in supporting women in that transition to motherhood and connecting her with other mums in the same stage of life as her.

But what about the dads? Recent research out of Deakin University called out the importance of making these groups more dad-friendly. According to Norma Barrett, lead researcher, “Previous research shows first-time parents groups are beneficial to both mums and dads. As well as providing parenting information, they nurture family connection, provide peer support and a sense of community connectedness.

“It’s also important to recognise that in Australia, more than 18 per cent of lone parents are male and the number of same-sex parents is growing.”

The research found that despite Victoria changing ‘Mothers Groups’ to ‘First-Time Parent Groups’ 20 years ago, the term ‘Mothers Group’ still persisted and it, along with other prohibitive factors such as scheduling meetings during work hours, is isolating dads.

Dads are almost on the back foot as it is when it comes to the transition to parenting. One dad told COPE (Centre of Perinatal Excellence),  “You suddenly move from being a couple to being a family. I think women probably adjust more along the way through pregnancy, but for guys, it all suddenly becomes real in the first hours and days after the baby is born.”

While mum can feel every kick and movement as baby grows inside of her and has constant physical reminders of the coming change (hello heartburn, pelvic pain and not to mention the growing bump) for dad, the impending change is present but not as real.

Even though societal trends are changing and more and more fathers are taking time off after the birth of their child, mothers are still predominantly the ones accessing paid parental leave programs, more than 99% in fact (Source: Towards Gender Balanced Parental Leave).

Nicole Highet, COPE Founder and Executive Director explained, “The transition to becoming a father can often feel like more and more responsibility rather than part of their identity. We need to encourage them to see fatherhood as beyond just having to provide for the family.”

I have often had older men say to me, “I don’t know how you women do it, raising kids,” and that usually shocks me because in modern society, generally speaking, raising kids isn’t a woman’s job anymore. But while we see parenthood as more of a unified task to be shared between parents, there is a disconnect between what society expects and what it allows.

This isn’t going to lead to depression and anxiety in every father, you’ve seen the statistics, but for those it does, Highet shares this advice to their partners, “Equip yourself with info on what depression and anxiety is and how it manifests in men and when approaching the subject with your partner come from a point of view of being concerned rather than criticising behaviour and look for ways to create opportunities for them to do thing they enjoy to help them get back to themselves.”

Aside from the mental health implications, we have an obligation to consider dads in the midst of the early parenting years. The more dads are involved, the greater bonds they will develop with their children, which will have positive outcomes as they grow up. Dad involvement also helps shift the balance so both parents can pursue career goals and flexibility, as they need. But what is the answer? That I don’t know, but the more we talk about it, the closer we will be to finding out.

Sara Keli is the Editor of Kid Magazine. When she isn’t writing, designing or creating, you can find her enjoying the sunshine on her back deck with her two daughters or escaping into a good book.