Home is where the BBQ is 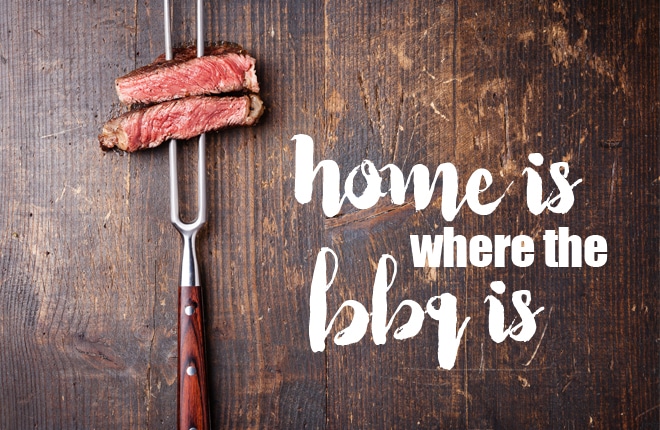 We had a wood fired BBQ in our backyard when I was a kid. Having a BBQ was a special occasion reserved for warm summery Saturday evenings. The smell of the fire starting and the meat searing was nothing compared to the marshmallows we would toast on the fire after dinner. I have so many happy memories of family dinners, swatting away the flies and mosquitos and enjoying the warm weather over a juicy steak, that is if dad didn’t overcook them!

Fast forward to the present and sharing a BBQ meal is just as important for my family. But we do things a little differently. We have a large gas BBQ set up on our deck and we BBQ all year round. Bacon and eggs for breakfast, a mid week steak when I don’t have any meal inspiration or inviting friends around for a long Sunday lunch while the kids run riot in the backyard. Our BBQ really is an extension of our kitchen.

This year I once again worked with BeefEater® Barbecues to host their annual BBQ habits survey. It seems that just like my family, the majority of the 1,000+ respondents indicated that they cook on the BBQ at least 1-2 times per week.

What really stood out most for me though was the family connection that is attached to the BBQ, particulalry for men. If you think of the stereotypical image of a man cooking on the barbie, he has a beer in one hand, tongs in the other and a group of mates standing around acting blokey. But in fact, 70 per cent of dads say they love barbecuing because it enables them to cook outdoors for their family.

One other statistic that really resonated with me was that 90 per cent of women admit that while their partner cooks the food, they are responsible for the planning, shopping, inviting guests, preparing side dishes when cooking a BBQ. I always remember a story my grandma tells about a time she was sick and my grandpa offered to cook a BBQ to “give her the night off”. He soon changed his tune when she asked him who would marinate the steak, make the salad and then wash the dishes when dinner was over. It seems that maybe times haven’t changed in every aspect relating to the outdoor kitchen!

Does your family BBQ much? Who does the barbecuing in your house?