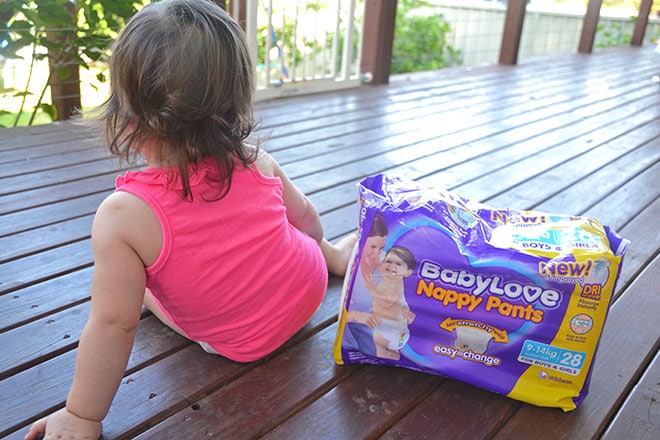 Just like any active toddler, 17-month-old Josie never stops moving. EVER. She is constantly on the go. Trying to pin her down just to change her nappy has become a huge challenge. We may be able to keep her down long enough to get the nappy off but putting it on is a whole other story. 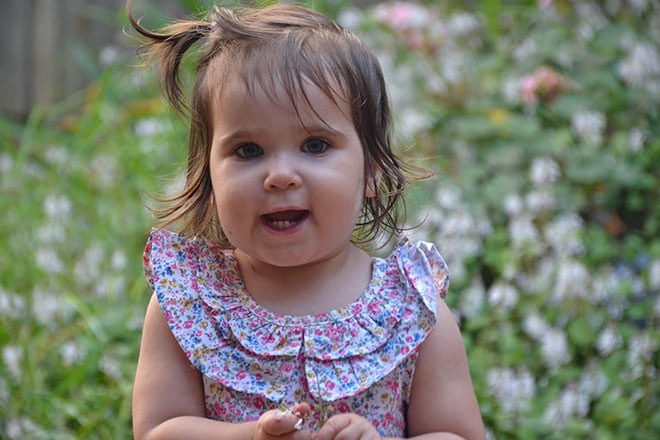 For the last few weeks we’ve been trialling the BabyLove Nappy Pants. We’ve been using BabyLove since Olivia was a baby and she is now four, so we already knew that we love the brand and nappies!

Overall, our experience with the BabyLove Nappy Pants was amazing. I’ve broken it down below for you in terms of absorbency, comfort and fit, design and ease of changing nappies.

Over the time we used the nappy pants we didn’t have any issues with absorbency and no leaks. I was changing Josie’s nappy about 5-6 times a day.

I did revert to using a regular nappy overnight as I feel like she needed the extra absorbency. We didn’t have any leak issues over night but I did notice that the Nappy Pants were fuller than a regular nappy hence the switch. 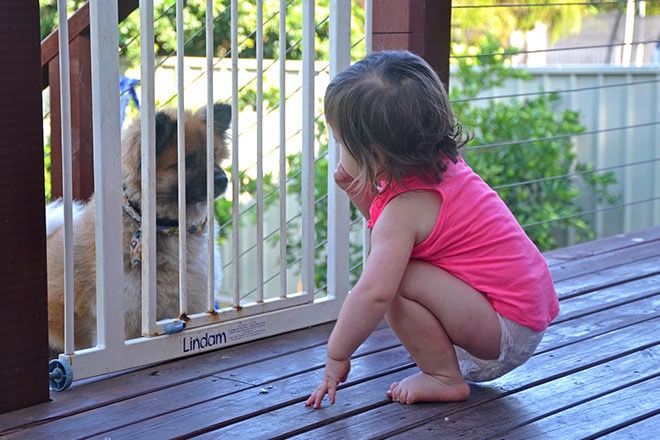 While Josie can’t tell me directly if she is comfortable, I would certainly know if she wasn’t! The BabyLove Nappy Pants have a really stretchy waistband which looks really comfortable to wear. She wasn’t left with any red marks around her legs where the nappy sits of around her waist. 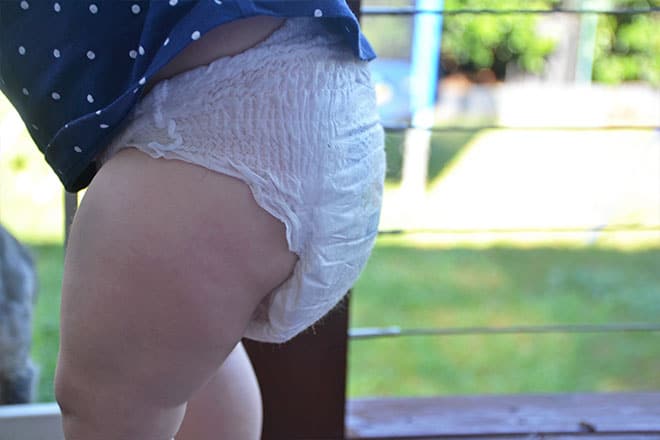 A few times when she managed to pull the Nappy Pants out of my bag, I caught her sitting down and trying to put them on herself. It seems that she is a fan!

The BabyLove Nappy Pants come in four sizes – Wriggler (7-11kg), Toddler (9-14kg), Walker (12-17kg) and Junior (15-25kg) so you can use them across a range of ages and sizes. Josie usually wears a BabyLove CosiFit Walker size nappy but was wearing the Toddler size Nappy Pants. She weighs about 12kg.

I love that the design of the nappies is simple. There is a cute design front and back and the nappy is mostly white. It is really soft and very much like a regular nappy.

Josie has an older sister and I think she liked that the Nappy Pants are really just like the undies her sister wears (which she often tries to put on her head!). For her, I imagine, it made her feel like a big girl like her sister. I think the Nappy Pants will help immensely with the transition to toilet training. 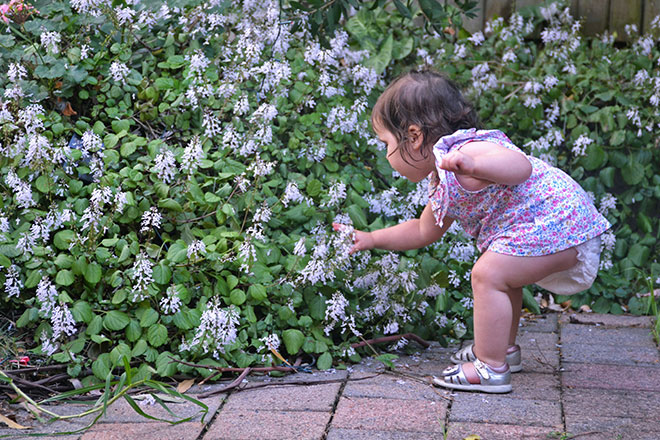 We have also recently had the issue that Josie has learned how to undo the tabs on her nappy. A few times I have found her wandering around the house completely naked because she managed to get her nappy off. Thankfully it was usually just after I had changed her nappy so there it was not a major incident! The design of the BabyLove Nappy Pants means that Josie can’t get her own nappy off. If you have a child who has a tendency to put their hands in their nappy, this might be a consideration for the Nappy Pants as the stretchy waistband would make this much easier.

Getting the BabyLove Nappy Pants on is really simple. It’s actually easier if they are standing up so perfect for active toddlers! Josie will usually sit up so we can get the Nappy Pants on to her legs and then she stands up so we can pull them all the way up. On occasions when she has run off mid nappy change (like when we have had to change her on the floor) I’ve been able to just pick her up to slide the nappy on and then pull it up as she runs away.

Getting the nappy off is really simple if you are just dealing with a wee. You can either slide it off or tear the seams, which are designed for just this purpose. 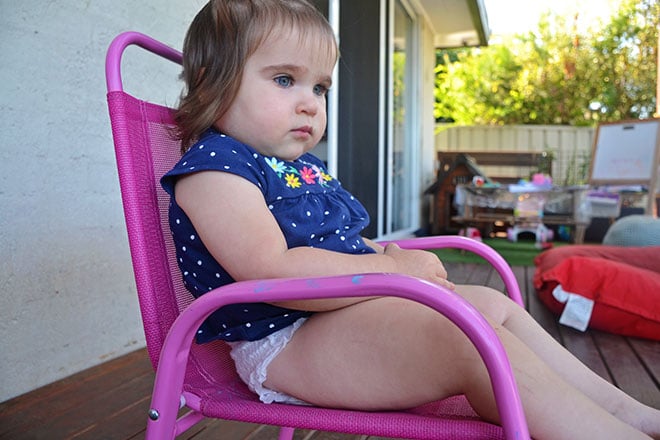 If you are dealing with a poo, the situation is a bit more precarious. Unlike with a regular nappy, there are no tabs to neatly close the nappy up when you have taken it off, keeping the poo enclosed in the nappy. For me, it really wasn’t a huge issue as the benefit we saw from the BabyLove Nappy Pants in terms of making life simpler, was far greater than the downside of having to handle dirty nappies a little more delicately than usual.

One design feature that helps when it comes to changing the Nappy Pants is the word “BACK” on the back of the nappy. Otherwise, both sides look very similar so that is a handy feature to make change time that bit easier.

Given how active Josie is, the BabyLove Nappy Pants have honestly been a game changer for us at nappy change time. Since using them I haven’t had to pin her down for a nappy change and the whole process of changing her nappy is much faster.

The feedback on Facebook when I posted about the Nappy Pants was really positive and it seemed like 17-months was a common age to start using them. Who wants to be lying down for a nappy change when there are so many adventures to be had! 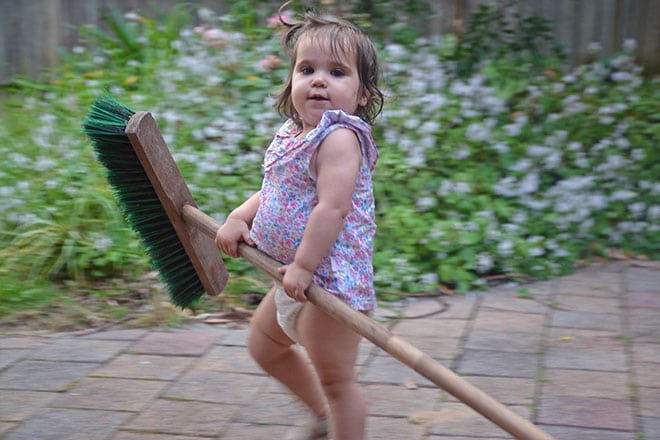 You can watch our little video review below!