5 common party dilemmas and how to handle them 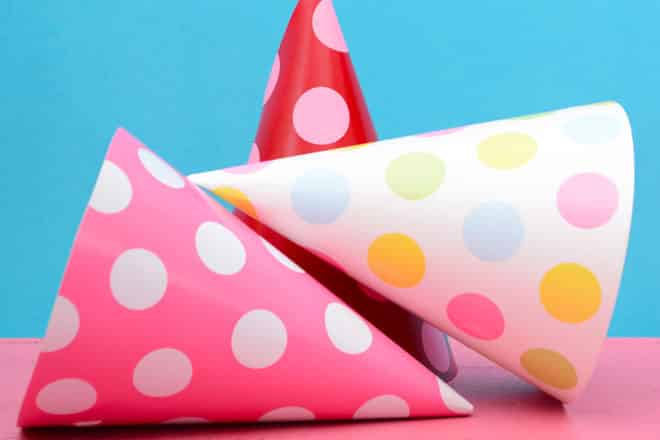 Planning a children’s birthday party raises so many questions! Where will you have it, who will you invite, and what will you actually do for their party?! Rachel Stewart is here to help with some ideas and clarity to help work through your choices.

Whole Class VS Couple Of Friends

Working out the guest list can be one of the trickiest parts of planning a children’s birthday party. If you invite everyone in their class it means no child misses out, which I think is a really lovely idea. But it can be expensive – and chaotic – to invite all 20 or so children from your child’s class!

I used to say my kids could invite as many children to their party as they were turning that year. Which seemed like a really clever idea at the time. The logic being that the older they get the less supervision they require, so the more children I can handle at a time.

But what I’ve found is the older my children get the tighter their friendship groups are. So we ended up doing the complete opposite! I’ve let them invite more children when they were younger, and then as they get older their parties are becoming more of an intimate gathering of close friends.

Going To A Venue VS Hosting At Home

Where to hold our children’s parties is actually something that is debated a couple of times a year in my house! I personally prefer to host at home. It’s where I feel most comfortable and in control. It’s also the most cost effective option.

Whereas my partner would rather go to a venue that covers all the food, entertaining, and the clean up! I have to admit he does have some very valid arguments.

One compromise is having the party at the park. So I’m in control of the catering and activities, but it’s not quite as intense as having an army of children running around my house. Though then there’s the stress of weather changes and not getting the exact spot you want if someone else gets there first.

Parents Stay VS Drop And Run

Another thing I’ve found as my children get older is I’m less and less involved in their social lives. When they were little their only friends were the children of my friends. So their parties were really just me inviting my friends over – so of course I wanted them to stay. Whereas my daughter’s last birthday party was the first time I’d met any of the parents. Which was nice to get to know the other parents, but I also found it really exhausting making polite small talk for a couple of hours with people I’d just met.

On the one hand if parents stay they can supervise their own child, so there’s less pressure on you to look after all of the children on your own. And it can also be nice to socialise with and get to know your children’s friends’ parents.

On the other if the parents leave then you can just focus all your attention on the children, without having to host and entertain adults as well.

Serve Alcohol VS No Alcohol

Whether or not to serve alcohol at a children’s party can be pretty controversial! I absolutely appreciate the argument that it’s important to show children that alcohol doesn’t need to be involved in every aspect of our lives. There is a problem with alcohol and drinking culture in this country. You also may be inviting families to your children’s party who would prefer not to expose their children to alcohol consumption at all.

That said I have to admit I do often serve alcohol (to the adults!) at my children’s parties. I’ve found that offering even just a single glass of wine just set the other parents at ease. As I said above, it can be really hard making small talk with parents, so just a little glass of wine goes a long way to lightening the mood.

Planned Games VS No Activities

This is the one reason that I’d host a party at a venue – to let someone else handle the activities! I find the planned activities at parties really hard. Though I think it does depend largely on the group of children and the mood or theme of the day. One of the most successful birthday activities I’d had was my daughter’s last birthday where we basically just had a craft table and then let the girls get busy creating.

Whereas when I’ve tried more traditional structured party games, like “Pass the Parcel” etc. I feel like I’m interfering with the children’s fun time. They’d rather just play without being managed. Though that could just be my children and their friends.

One idea if you’re on the fence is to have a few little games or activities on standby. Just in case the children appear in front of you declaring that they’re bored!

Rachel is a Melbourne base mum of two. She has a background in early childhood education, but always wanted to be a writer. She enjoys knitting, drinking coffee (sometimes wine), spending too much time on Facebook and is a little obsessed with prams. She also writes for her own website Parenting Central.